A few years back I was invited to attend the Barcelona presentation of the documentary film La memoria es vaga (Memory is Vague/Lazy), by American activist, film maker, standup comedienne and much more, Katie Halper. Filmed in 2004, this documentary captures the pernicious nature of Spanish historical memory in reference to the civil war, set in the regime’s most pharaonic monument located outside Madrid. To understand the mental process that lies behind the Garzón case, one first needs to understand the world view so starkly presented in the film. 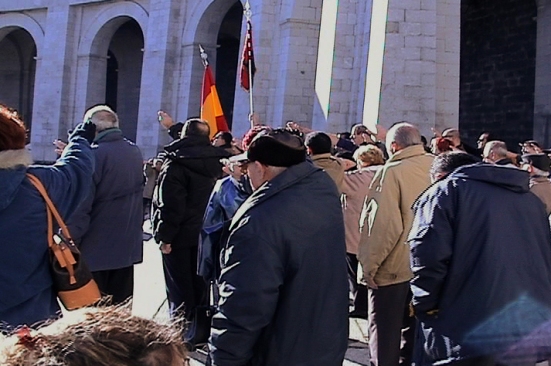 From the film: Regime nostalgics make the fascist salute in the Valle de los Caidos

By one of those universal “coincidence” things, I had met Katie many years ago in New York. It was curious to meet her again in the Barcelona Ateneu, presenting her film together with several surviving prisoners that had worked in the construction of the fascist monument. Foreigners are often better at putting their finger on the underlying nature of the Spanish ethos, as Katie demonstrates in continuing the proud tradition of the International Brigades in the fight against fascism, and of authors and historians such as Hemingway, Orwell, Ian Gibson and Paul Preston helping us keep our true historic memory alive in the face of His story, which is always written by the victors. Gracias, Katie. Eres bienvenida aquí siempre.

LA MEMORIA ES VAGA tells the untold story of El valle de los Caídos, the Valley of the Fallen. Constructed after the Spanish Civil War under the pretext of reconciliation, Spain’s largest monument was built by political prisoners in concentration camp conditions and came to house the tombs of Spain’s two most prominent fascist leaders, Jose Primo de Rivera and Francisco Franco. Through interviews with former political prisoners who built the monument, current members of Spain’s fascist party, the sculptor who designed the monument’s 500-foot cross, and Spaniards who visit the tourist attraction, LA MEMORIA ES VAGA reveals the controversial history and legacy of this pharaonic monument, whose existence continues to provoke division in today’s Spain. Ultimately, the film sheds light on the Franco dictatorship, Spain’s transition from dictatorship to democracy, and its current struggle to recover hidden history.

Fallen for God and for Spain: the monument dedication