Ah, football, or soccer or foochy-ball as they call it in Brazil. The biggest circus on Earth, bigger than the Olympics, Disneyland and Madonna’s titty combined. It moves more money than a tropical tax haven, commands the passion of billions worldwide and, in some strange twist of fate, has become Spain’s most brilliantly useless success story since the crisis began.

Just days ago, Spain’s national football team “La Roja” –not to be confused with “los rojos”— won its second consecutive European championship, becoming the first team in history to win twice in a row AND win the World Championship in between. Indeed, after winning its first Euro in 2008, it went on to be crowned World champ in South Africa 2010, and now again is Euro champ. Easier said than done.

Behind this ongoing success is a clearly differentiated style and philosophy of the game, which has given La Roja a competitive edge that its rivals have yet to counter. It is fast, precise and deadly, with exquisite control and constant movement in search for a weak point in the defense line. It is football the way it is supposed to be, clean, direct and superbly applied. And not only is it aesthetically pleasing, but it wins championships too! What more can one ask for?

Well, from a purely footballistic pov, not much, really. If football were edible, we’d be stuffed; if football could pay our bills, we’d be debt-free. If football were our economy, German banks would be asking Spain for a bailout. So, as far as circus is concerned, Barnum move over: we are royalty, creme de la creme, bocatta di cardinale, ibérico de pata negra.

Having settled the circus issue, let us now discuss the bread.

The famous Roman panis et circensis, or bread and circus, is an integral component of modern democrazy, which is essentially Roman Imperial Law with a dab of vaseline (courtesy of the catchalick clergy). It’s a simple concept: citizens must be kept fed and busy, else they might actually try using their neurones for things like thinking, which in turn could lead them to using their bodies for things other than working, which would definitely be bad for business.

There is a necessary balance to this system. When the bread starts to dwindle, the circus must ratchet up to fill the space or a dangerous vaccum is created, and power hates a vaccum as much as nature, maybe more. As if on karmic cue, La Roja’s string of success began in the summer of 2008, just when the reality of the crisis was beginning to dawn on the Peninsula, and continues to carry us through five years and three titles later. Nero had his lions, Spain has La Roja. Nero played his fiddle while Rome burned down around him. What are the democrazily elected emperors of Hispania doing as the economy burns down around them?

That’s right, playing their fiddles… and I don’t mean the musical instrument.

El presidente Ratjoy –in Spanish, “he who makes rodents happy”– in his capacity as Chief Debt Enforcement Officer of Iberian Livestock (minus Lusitania), has apparently seen the light and is now the leading voice in favor of “bank and fiscal unity at the EU level”, which translated from officialese doublespeak means “giving it [your national sovereignty] up to the unelected Peen technocrats du jour” or, more succintly, “You’re a Peen, citizen”.

Of course, fiscal unity means little, considering that Spain gave up the only sovereign right worth having over a decade ago when it ditched its own perfectly spendable Peseta for the wretched Euro clusterfck. So now Peeners get to decide how much we pay in taxes, after having wrecked our economy on the path to total power consolidation in Brussels via Berlin. What’s not to love?

Yeah, okay, I didn’t vote for them either. Nobody voted them because folks like these aren’t electable and don’t even bother trying. EU President Durao Barroso is an unindicted war criminal semi-amphibious bankster peen puppet, while EU President Van Rompuy is, simply said, the Grinch Who Stole Your Taxes. Repellant specimens such as these bite and claw their way to power in supra-national and unaccountable institutions like the EU, and are living proof of the rotten and peenish nature of the institution itself, which has two presidents and no-one even cares.

Barroso, far left, with buddy war criminals and future cell mates; and Rompuy at right coming for your taxes

But let’s ignore the Peens for a moment, pretend they’re sitting trial at Nuremberg or exiled in South America or something like that, and take a look at Spain’s success stories. We’ve been wading in the mire of economic gloom & doom for so long we tend to forget that the problem isn’t that we suck, but that our banking system and its political reps are criminally corrupt cheaters & liars that are sucking us.

So, what does Spain do well aside from kick balls? Well, the Iberian innovative capacity has found some unexpected niches in the global market, such as high gastronomy with El Bulli and chef Ferran Adriá, pret-a-porter fashion design with Inditex of Zara fame, high-flying architecture like Calatrava, plus video game design, automotive design, genomics and surgery. In Barcelona, surgeons are performing heart surgery and tumor removal on unborn fetuses, multiple limb transplants, surgery without cutting using existing orfices and other incredible techniques. This is not an exhaustive list, but it proves there is life beyond the hallowed economic triumvirate of banking-construction-tourism, of which soon only the tourism will remain. 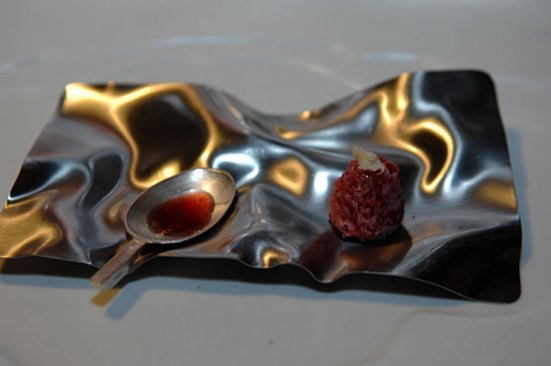 lunch time at El Bulli, where the dishes and cutlery are edible… good value for money!

For too long, Spain suffered from low self-esteem like so many countries with grey dictatorships in their recent pasts, thinking everything that came from outside was inherently better just because it wasn’t Spanish. If anything good can be said to have come from the Euro project, it’s that it gave Spaniards some self-esteem as part of a larger whole, and has brought about a new generation ready to be the best at whatever, perfectly embodied by our triple champions La Roja. Shame half of them are unemployed and emigrating to Germany in seach of work, except for the ball kickers.

Note to Europe: you can take all our bread, but we will have our circus and eat it too. We’ll even consider losing the next championship to the highest bidder… psyche!