When karma wants to mark a milestone, it uses synchronicity to connect events by their symbolic meaning so we may note their significance in the larger context. The 99PS Karma Economics Desk has been catching some flagrant karmic milestones in recent times, one regarding the fall of the Spanish (head of) state and another regarding the fall of the London banxters death grip on the American colonies. Both of which BTW remain fully in effect even though they haven’t happened as yet… karma markers mark the moment the energies shift at the subtle level, but how long these energies take to manifest in density depends on many factors. The way things are going right now, this desk believes the above processes may be well underway even if not yet readily apparent to the public, in pure sneak apocalypse style.

Yesterday marked the passing of another karmic milestone of great significance and motive of celebration for most human beans. The announced abdication of the papone of roam has taken the world by surprise, but most people assume it is just business as usual. Karma, however, suggests otherwise by synchronizing a totally unrelated event to coincide with the papone’s announcement: the death of the world’s largest known crocodile in the Philipines. This desk contends that the symbolic sum of these two events together marks no more and no less than the end of the reptilian influence over human beanity. The age of lizzies is ended, the ride is over for those of the scaly persuasion and their minions. 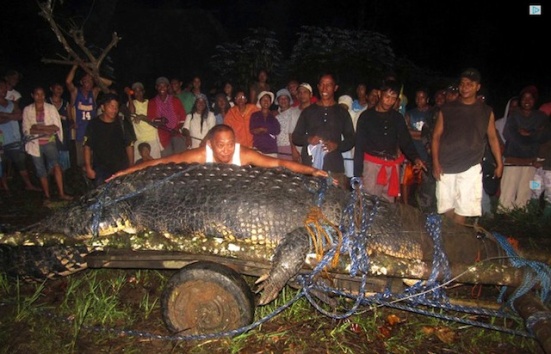 Lolong the croc on the day of his capture in 2011

The KE desk, for reasons of symbolic refraction, keeps tabs on news items involving large reptiles because karma often uses them to symbolize the lizzies when it wants to be less ambiguous than usual. Indeed, the very same crocodile that died yesterday had already made the desk’s radar back when it was captured, coinciding with the shady “papone’s butler” affair. This gives us a previous situation of symbolic entanglement between the croc and the papone that only makes this synchronicity all the tighter.

In a nutshell, this giant 6-meter, one-ton salt water crocodile living easy in the coastal swamps of Philipines was captured in 2011 by a posse of natives who accused it of eating a water buffalo and possibly a fisherman. They named it Lolong and for over a year they kept it in a park and charged visitors to ogle at it; the news is that Lolong just passed away of natural causes related to stomach issues TBD. Boom, just like that, on the very same day the papone announces he’s standing down. To paraphrase Billy Joel: there are no islands left for reptiles like me…

It is said the lizzies have been here a long time messing with our shit, fcking with our DNA to make us good slaves and exploiting our mother planet like a cheap trick. Their system takes control of the ancient reptilian part of our brain with fear-based frequencies to keep us from accessing our higher human potential. A reptilian system for the reptilian mind that has lasted way too long already.

The tide is turned. This desk foresees a troubled concilium of purpurates trapped in an imploding batty can deprived of its dark powers (see what Kevin Barrett over at VT has picked off the grapevine to get a taste of the deeper currents) but most of all we foresee an unshackling from the reptilian mind that will be in benefit of the many. For all the fear caused by these uncertain times there is a higher vantage point where calm and certainty can be found in each and every one of us, if only we choose to find it. If you haven’t already, now might be a good time to start.

Well, some days are more karma marky than others, as the headlines regail us with another moment of noteworthy symbolic import, namely the official press release from the Spanish government titled “Rajoy offers condolences for death of Rajoy” that was sent to all major media yesterday. Apparently this turned out to be a freudian slip –the condolences were from Rajoy to someone else– although any self-respecting karma observer will recognize the twisted humor of karma in this “typo”.

From a symbolic pov, it is quite straightforward: even Rajoy’s own propaganda apparatus considers him a dead politico walking. His utter competence as a banxter peen puppet economic terrorist foreshadows a short and ingominious stint as chief debt enforcer; indeed he is already hanging on by the skin if his teeth as his corrupt administration sags and crumbles around him enveloped in flaming scandals. If he makes it past Spring it’ll be nothing short of a miracle.

And if he doesn’t, there is no doubt his condolences will be heartfelt.